Hey everyone - A friend of mine recently showed me a capture the flag (CTF) event that he was working on, and he looked like he was having fun, so I wanted to give it a try.  The CTF is called Hacky Easter, and it is put on by the folks over at HackingLab.  You can check out the event here. The actual event starts on April 4, 2017, but a teaser was available beforehand.  This write up is going out after the teaser is over so that everyone can have fun with it, but I wanted to document how I approached the problems because it was a lot of fun.  Kudos to the people at HackingLab for creating the challenges and putting it on.

Let's get started.  Click Read More to see my write up.

All you have to do for this one is reverse the string, and you get:

You can also do this using Python if you like:

At first, this looks like a bunch of junk. Since I have seen strings like this before, my first guess is that this is a Base64 encoded string. Base64 is a popular way to encode binary data as a series of printable characters so that it is easier to transmit. If you see weird strings like this, starting with the hypothesis that it is encoded in some way. I found the Wikipedia article on Binary to Text Encoding really helpful. It might not be a bad idea to become familiar with some of the more popular encoding schemes like Base64, Percent Encoding, and hexadecimal (Base16).
Let's try base64 decoding this string. There are online utilities that can do this for you if you do not want to fire up Python or write some code in your favorite programming language. I am going to do it in Python:

This one was in white on a white page. One way to find it is to look at the source code of the page (right click, View Source).

This is some sort of function call. The use of the word "function" told me it is likely JavaScript. It has been minified which means that all of the things that would make it easy for a human to understand have been stripped out. For example, all of the variable names are one letter, and there are no comments. This saves on the amount of data that needs to be transferred to each client. If you are hosting a web site that gets a lot of traffic, you do not want to pay for unnecessary bytes. Since humans do not need to see the JavaScript behind a website, it will be minified. Another reason to minify is to obfuscate your code so that it will be harder for someone to tell what it does.

For our purposes, we can evaluate the JavaScript using a site like this one at W3Schools. If you are going to run any code from an untrusted source, I recommend doing it in a VM. When we run the JavaScript, we get the answer:

At first, I thought this was a bunch of hexadecimal characters (3a, 3e, a0, and so on), so I tried to convert them from hexadecimal to something readable:

Well, that does not look useful. So I thought about how they were presented. There are five lines of 32 characters (128 bits) each. The letters are all lower case, and there is a mix of numbers and letters. However, I do not see any letters other than a through f. This might be some sort of hash. Every solution up until now has been five characters, and there are five lines, so maybe each line is a hash of a character in the solution. What hash though?

A common 128 bit hash is MD5, so we can try that. Hashes are one way functions meaning you can hash something but you cannot unhash. To see if the hashes match possible characters in the solution, we will have to generate a hash for each possible character. Fortunately, we have only seen uppercase letters and numbers in solutions so far which makes for 36 hashes we have to compute. That should be relatively easy, so let's try it:


If we reorder our solutions in the order that the hashes were presented, we get the solution: EBQSA.


This looks like morse code, so I used a morse code translator. It gives us our solution: ONE MORE HERE: JAOMY.


You might be tempted to take the last five characters as the solution, but this one is probably more complicated than that because all of the solutions so far have been readable. We have printable characters, no numbers, and punctuation. With that set of characters, I do not think it is a common encoding scheme like Base64 or even Base32. It might be a shift cipher (a cipher where each character is shifted in the alphabet a certain number of times). For example, a shift cipher where every character is shifted three places forward in the alphabet would turn the string "ABC" into "DEF"

For maketrans, we are going to build 26 translation tables. For a given number or shift, the translation table will be the string of A..Z starting at the letter in the position of the shift and ending with the last number / shift of letters in the string A..Z. For example, with a shift of +3, the table will be A..Z starting with position 3 which is D (Python starts counting at 0). We then take the rest of the letters until W. That will give us 23 characters. For the last three characters, we need the last three characters of the alphabet (XYZ). Once we have built all of the tables, we will translate our puzzle string using those tables, and get our answer (hopefully). Here is the code:

There is a lot of junk in there, but if we look at +23, we have our solution: ETIAM TU, BRUTE! NVXSI. The solution is a reference to a Caesar cipher which is the type of shift cipher we have talked about where the number used to shift the characters is constant for the whole message. You could have a cipher where the number of shifts per character is different.

I thought this was a bit shift or something like that, but that did not pan out. I spent a while on this one trying to flip or shift bits in the string. After a while, I was getting nowhere, so I took a break and browsed the Internet. I saw a shortened URL that looked a little similar (letters and numbers). Then I thought back to the clue a bit...bit.ly is a URL shortener.

So I tried going to bit.ly/2mi4AMj, and this is what I got:

This is probably the puzzle I liked the least because it was very obtuse. However, we got the solution: 5DFME

At first, this does not seem very useful, but there are often interesting things in the comments of HTML pages. If we look there, we find out solution: A43JN

Let's try to turn this into bytes:
The resulting byte string is not printable, so maybe the alien is 1 and the ghost is 0:
Looks like we have our solution: CONGRATS! N5XGK


These are two 34 byte strings, so they are not a hash that I am aware of. The lower string looks a bit strange because it is a repeating pattern, so maybe it is some sort of key. One type of cipher is a one time pad where the plaintext is XORed with a byte string that is used only once. To decrypt it, you need to XOR the cipertext with the key. Maybe we should try that with the second line being the key: Looks like we found our solution: XOR IS FUN! ON52C 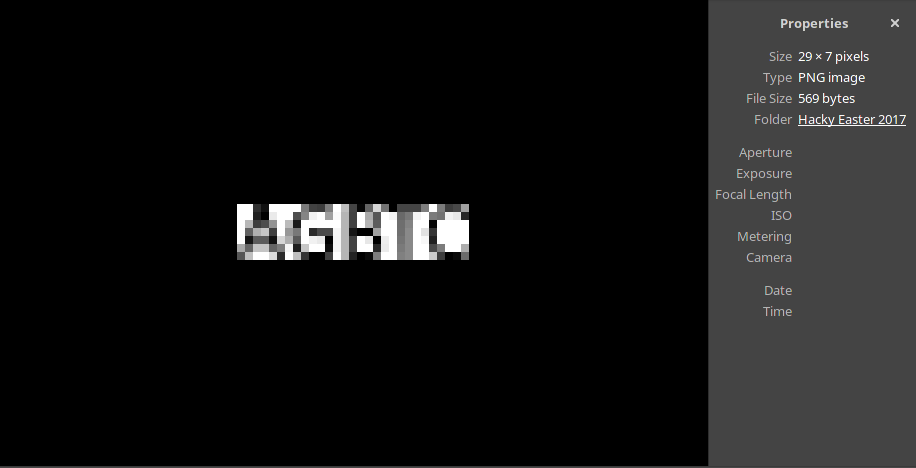 There is our solution: AGBTC

The second line looks like a regular expression. The .* and ([ID]{2}) give it away. So we need to apply the regex on the second line to the first line:
So we have six different groups. This does not look like a solution, so we are probably not done yet. We still have one more line to take care of. $2 means capture group 2. In this case, that is 'ID'. The E is a literal E, and $4 means the fourth capture group ('N'). The final 4 is a literal 4, so if we put this together, we get our solution: IDEN4

Okay, the final one. What do we have? That looks like a bunch of junk. By this time, I had become very familiar with the Binary to Text encoding page on Wikipedia that I linked above. I recognized this as Ascii85. Luckily, Python can decode this for us:
And we have our final solution: This is the last one! DFMFZ

Even though we have found all of the solutions, we are not done yet. We need to combine them in the right way and derive the final solution. Let's see what we have so far:
Because I was familiar with binary encodings, this looks like Base32 because of the alphabet: A-Z and 2-7. Unfortunately, we cannot just ask the computer to try all 16! (16 factorial) permutations of these 16 strings. That would be a ton of operations, and we do not have time for that. However, we can combine as many small chunks as we can to make the problem easier to solve. I wrote the following Python snippet and used it as a base to solve this:
itertools.permutations allows you to specify how large you want the permutations to be. I started with 2, and that did not yield anything interesting, so I increased it to 3, and something fell out:
For the smaller sets of strings, I had to pad the base32 decode with equal signs because base32 strings must be a multiple of 40 bits or be padded to a multiple of 40 bits. For permutations of 3, I needed to pad the base32 string with one =: I know I did not have to put 1 * '=', but it was easier because I was trying to different paddings with different lengths of permutations. I also tried with permutations of length 4, and another string fell out:
So, instead of 16 strings, we only have 11. Here is the final code:

This ran for an hour or so and eventually popped out the answer:

And that is it! This teaser was a lot of fun, and I learned a lot along the way. Until next time!
Posted by Attack Zero at 9:00 PM