The "Other" Linux MAC Software: AppArmor

Hey everyone - We have spent a lot of time talking about security measures that are somewhat similar in what they do at a high level.  The implementations differ, but AppLocker, SELinux, and AppArmor (which we will talk about today) implement varying levels of mandatory access control.  The reason I am harping on this topic so much is because I do not feel that it is well understood.  While I have mentioned in every article I have written on these defense measures, none is a foolproof way to prevent all attacks all of the time.  When they are configured correctly, they make it more difficult for an attack to be successful.

AppArmor is similar to SELinux, but the implementation details between each differ.  They both sit on top of the default discretionary access control that exists in Linux systems.  Which one you would want to implement will probably depend on which Linux distribution you are using.  AppArmor is turned on by default on Ubuntu and OpenSUSE whereas SELinux is turned on by default for Red Hat based distributions like CentOS and Fedora.  Both are available for other distributions as well.

AppArmor works by confining processes to a pre-defined set of resources (like which files it can access, how it can access the network, et cetera).   It does this through profiles.  Profiles are defined on a application located at a particular path.  If you have the same application installed to two different places on your system, you would need to write two separate AppArmor profiles to protect them.  This means you have to be diligent about what you have on your system and what needs protecting.  Applications that are not defined by a profile (called unconfined in AppArmor speak) are subject to the normal system access controls.  When the action is allowed by the system, AppArmor is consulted.  If there is no profile defined for that application, the action is allowed.

Fortunately, AppArmor has a learning mode (similar to SELinux's Audit mode) called Complain where the system logs and alerts infractions but does not actually prevent anything.  This makes it easier to develop profiles and test them before you deploy them.

As with any security measure, it is important to understand how the program you want to restrict works so that you can strike the correct balance between security and usability.  If you define a profile for an application, anything not in that profile will be denied.  Like with anything, we need to start with definitions and an understanding of how the tool works.  That way, we can use it more effectively.

Let's take a look at a small sample AppArmor profile and talk through it:

Parts of an AppArmor Profile

AppArmor profiles feature various sections, much like a program or script.  We will talk about the sections of our sample in order.  First up is includes.

Includes allow you to reuse pieces of profiles you have already written.  Includes have the following benefits:
There are three types of includes:
Includes start with #include (no space) and use pointed brackets '<' and '>' to let AppArmor know where to look.  Profiles live in /etc/apparmor.d, and relative directory declarations will be relative to that path.  So, in our example, tunables/global will be the file under /etc/apparmor.d/tunables/global.

The @{HOME} variable we declared is an example of a local variable.  These are used to define paths that you want to control access to.  These are usually at the top of the file.  They are local in the sense that they are only defined in the context of the particular profile they are in.  If you want to use a variable somewhere else, a tunable would be a better option.

They are declared this way:

Aliases are similar to global variables and are used to rewrite paths.  For example, if you have a profile that uses /home for everything and you have a different directory for home (say /faraway), you can create an alias which will save you from changing the entire profile.  That alias would look like this:


Aliases should be defined after you define variables.

Capabilities are certain privileges defined in the Linux kernel for functions typically given to the root user or superuser.  An example of a capability is to change ownership of a file (chown).

Unfortunately, network access control in AppArmor is not very granular.  You cannot restrict an application to certain ports or IPs.  You can say that an application can only use TCP or UDP for communication or is allowed to open raw sockets.  That is about it.  For finer grained access control, a firewall would be better.

File and directory access control in AppArmor roughly translates from the traditional *nix style discretionary access controls with a few additions.   The permissions you would expect, such as read, write, and execute are there.  We will talk a bit more about execution in the next subsection.  Before we get into the controls themselves, we have to talk about how files and paths are specified in AppArmor.  Globs are used to specify groups of files or directories.  Globs in AppArmor look a little like regular expressions, but they are not as powerful.  You can think of globs as wildcarding what you want to specify.  In upcoming releases, AppArmor may allow the specification of globs based on Perl Regular Expressions, but for now, we will talk about what we can do today.

The most common globs you will work with are the following:
Let's work through a few globs so that we can cement the idea.

Here are a few examples:

I mentioned in the last subsection that when you want to control execution with the x permission, you have to qualify it with additional permissions specific to execution.  We will run through those now.

Hats allow a program or subprocess to assume a different security context when necessary.  We talked about security contexts in our SELinux discussion.  The idea is similar here.  A program can wear any number of hats (or subprofiles), but it ends there.  A hat cannot have its own hats. Hats are not used too often, but you might see them, so I wanted to mention them.  They look like profiles but start with a caret (^).  So for example, ^myhat {...} would define the hat myhat.  Inside of the curly braces, you would define your rules as normal.  A program has to be aware of hats so that it can change between them.  The best example that I know of with hats is apache using mod_apparmor.

We have talked about an audit mode in both SELinux and AppLocker.  A similar mode called complain exists in AppArmor.  There are a few ways of invoking it, but I like to run aa-complain against the profile I want to put in complain mode.  The command would look like this:


aa-complain must be run as root.  To turn off complain mode (and turn on enforcing mode), simply run aa-enforce:


aa-enforce must also be run as root.

What Should I Make AppArmor Profiles For?

AppArmor profiles (or SELinux Security Contexts) are good for applications that are at a higher risk for coming into contact with untrusted and potentially malicious input such as web servers and web browsers.

The last thing I wanted to discuss in this post is a small example that should summarize everything we have talked about so far.  I wrote a very small script that reads two files: /etc/passwd and ~/.bashrc.  I want to make it so that the script is confined to the home directory of the user running it.   Here is the script:

Essentially, the script tries to open /etc/passwd, and if it fails, it will print a message saying it could not open the file.  The script then does the same with the user's .bashrc.  Without any protections, both tries should work.  Let's look at the standard permissions on both files: 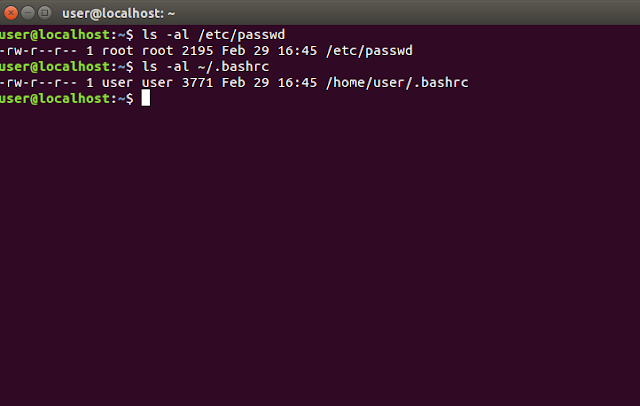 So, /etc/passwd is world readable, so our user should be able to open it.  As we expected, our .bashrc is owned by our user, and we have permissions to read it.  With that, let's try running our script (I put it in /usr/bin/badscript): 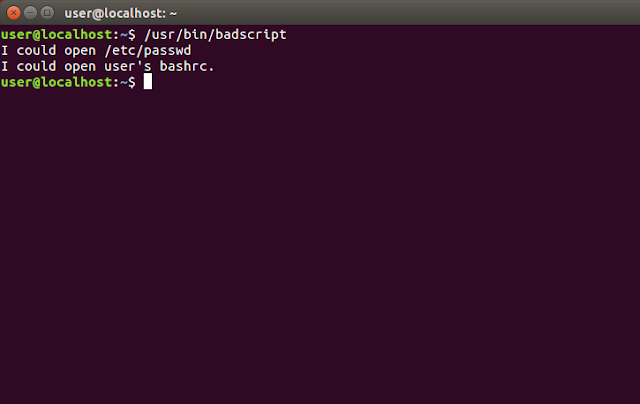 This is not what we want, so let's write a profile:


Let's go through the profile. tunables/global includes tunables/home which gives us the @{HOME} variable.  We want the script to be able to read files in /home, so we will let the script access files and folders (**) under @{HOME} (/home/ and /root/).  Since the script is a Python script, we need to let the things Python needs to run.  Those are the next four lines after the comments.  You might be wondering how I knew to write permissions for those folders and files.  In order to write the profile, I put it in complain mode and looked at what the executable tried to access.  We will go through this in a minute.

When you want to use the profile, place it in /etc/apparmor.d/.  I called it usr.bin.badscript.   You can call it whatever you want.  We will restart apparmor to let it read our new profile: 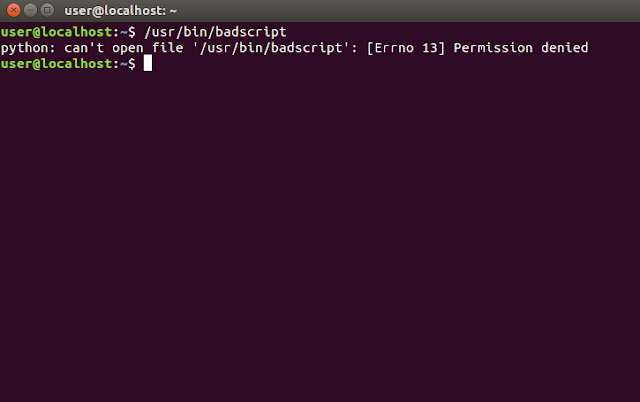 Oh no!  We wanted to confine the script, not to stop it from running.  Let's put the profile in complain mode and see if we can figure out what happened: 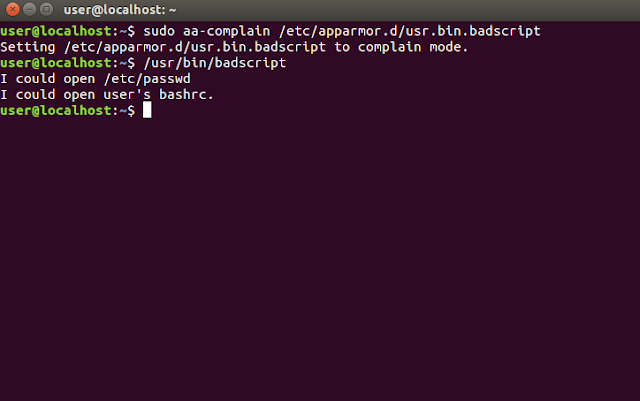 The script ran, so that is good.  To figure out what we need to allow to make the script work, we need to look at the kernel log in /var/log/kern.log.  You will want to look for lines that say ALLOWED, like this one:

I put some line breaks in to make it easier to read.  The parts that help us understand what should have been denied are on the last two lines (everything starting with name=).  We can see that a read was attempted (requested_mask = "r") and was denied (denied_mask = "r") on the file /usr/bin/badscript (name="/usr/bin/badscript").  So it looks like we to add /usr/bin/badscript to the profile with an r permission.  This makes sense because the Python executable is executing the script, so it needs to be able to read it.  Let's add that.  The profile now looks like this:


Now, let's put the profile back in enforcing mode, and see what happens: 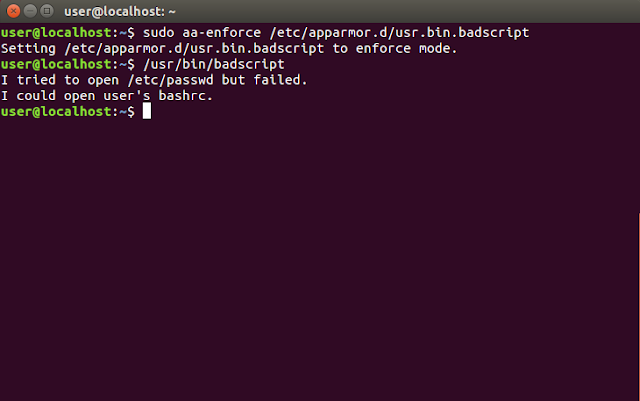 Success!  Let's look at /var/log/kern.log to make sure the profile did what want:


This was the only new log that was created, and as we can see, the /usr/bin/badscript profile tried to read (requested_mask = "r") /etc/passwd (name="/etc/passwd") and was denied (apparmor="DENIED").

When debugging your own profile, it is important to think about whether you want to accept the risk of writing permissions to let the program do whatever it is it wants to do.  This depends on your risk tolerance and how much you need the program to what it wants.

Over the past few posts, we have talked about a few defense measures that implement various access controls and protections.  I hope this series has been useful for you.  None of the measures we have talked about are going to protect you from everything.  As I have said a few times before, when correctly configured, these tools can help you build a layered network defense.  Thanks for reading, and if you have any questions, please let me know!