On The Topic Of Incorrect Filesystem Permissions

Hey everyone - We had fun with containers, and now I want to shift to a slightly different topic.  I came across this article about privilege escalation due to a vulnerability caused by incorrect file system permissions.  The article talks about the issue in Windows, but it can happen with any file system and operating system.  We will take some time today to get familiar with file system permission in Windows, specifically NTFS.  We will also take a look at ways you can help prevent the issue referred to in the article.

File permissions are a method for helping to prevent unauthorized access to files and folders on a computer.  The file system keeps track of the permissions on a given file by maintaining Access Control Lists (ACLs).  There are two popular types of access controls that apply to file systems (and sometimes to resources on the file system as well):
Most desktop systems use DAC, so we will talk about that today.  There are two other access control systems that we will not go into detail about today, but I wanted to mention them anyway:

NTFS uses discretionary access controls.  On your local Windows system using a drive formatted with NTFS, there are five basic permissions you can set on a file:
On a directory, permissions work similarly, except with the following differences:
To see the properties for a given file, right click it, choose Properties, then click the Security Tab.  You will see something that looks like the following: 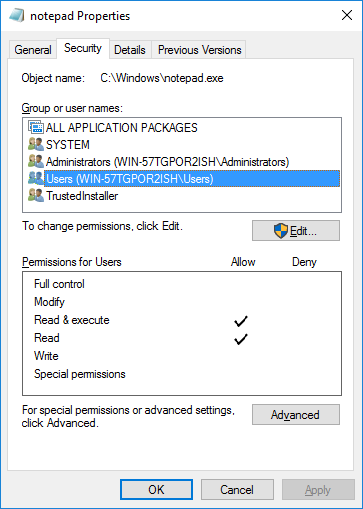 In the top half of the pane, you see the users and groups that have access (or are denied access) to the file.  The check marks indicate the permissions that the user or group have on the file.  You can see here that Users on the local system can Read and Read and Execute notepad.exe.  What would happen if the check mark next to Write, Modify, or Full Control was checked for notepad.exe?

When File System Permissions Are Not Set Correctly

If a user could make changes to something like notepad.exe, that could be problematic because the user could replace notepad.exe with another executable that looks and acts like notepad.exe but contains a key logger or something else.  What would be worse is if the executable with incorrect permissions was executed as SYSTEM.  That could allow a malicious user to execute arbitrary code as SYSTEM (the highest user on a Windows system).  This is an example of privilege escalation.

That is the gist of the article I linked to at the bottom of this post.  Essentially, a common application had the correct file permissions for its service executable, but one of the components (a second executable) that the service executable ran had permissions such that any authenticated user on the machine could write to it.   This means that if a malicious user overwrote the second executable, the code that the malicious user substituted would be run as SYSTEM.  That is not good.

So What Can We Do?

I thought about the issue, and I thought it would be good to have a script that you could run on any folder on your system and it will tell you if there are any executable files that have Write or Full Control allowed for a user that is not SYSTEM, an Administrator, or TrustedInstaller.  If someone has SYSTEM or administrative access to your system, they have already escalated privileges, and this problem is moot.  TrustedInstaller is a mechanism that Microsoft introduced with Windows Vista that helps to maintain the integrity of key system files (listed here).  If an attacker is able to use this to control your system, they have already escalated privileges as well, and they do not need to escalate them via the method we have been talking about.

When I thought about writing the script, I had to think about what language to write it in.  I am most familiar with Python, and Python has the tools to accomplish this task.  However, Python is not installed on every Windows machine, so I did not want to make that a dependency.  There is one tool that is available on every Windows box from Windows 7 on (and each corresponding server edition): Powershell.  Powershell is also available to download for Windows XP, Server 2003, Vista, and Server 2008.  So, in order to make this tool as useful as possible, I decided to try to code it in Powershell (which I have never coded in before).  While you are looking at the code, keep in mind that there may be better ways to do this, and if there are, please let me know.  I think Powershell is an interesting tool, and I would like to get better at it.

The code is available on GitLab, but we will talk through how it works in general.  The source code contains full comments.

Essentially, the script does five things:

What should the permissions be?

To answer this question, we need to talk about the principle of least privilege.  The principle of least privilege says that a user in a system should have everything he needs to do his job and nothing more.  What exactly that entails depends on the user, their role, and the rules in place in the organization.  As a rule of thumb, it is good to give SYSTEM and Administrators Full Control (if this makes sense in your organization).  TrustedInstaller only concerns Windows system files, and there is no need for you to manage it since Windows takes care of that.  Also, the CREATOR OWNER of the file should also have Full Control.

We have not talked about CREATOR OWNER yet because it is a bit abstract.  It is a sort of alias for whoever happens to own the file when it is accessed.  You cannot say who is in the group, but you can restrict its access.

Authenticated users should have read and execute permissions (if executing the file is allowed for them), and nothing for everyone else.

NTFS allows you to have granular control over file permissions.  We only talked about local file permissions in this article, but this is a good start.  If you have suggestions to make the script better or more useful, please let me know.  If we can help pick this low hanging fruit, our collective defensive posture will be just a bit better.