Setting Up Your Playground

The question I needed an answer to was:


How should I set up my home lab?


In order to practice techniques as well as explore new ones, I wanted to set up a virtual playground.  The reason for this was two fold: I wanted to have a bunch of machines I could tinker with without having to worry about unleashing malware on my daily computer and every other computer in my network.  I also did not want to buy a bunch of systems.  Besides the initial hardware costs, there cost money to power, they make noise, and they take up space.  So, the obvious answer is virtualization.  Virtualization allows you to host a number of virtual machines on one or more "bare metal" computers.  Virtualization works by abstracting hardware and allowing the user to run virtual instances of various systems (called virtual machines). These virtual machines run on top of the "bare metal" on what is called a hypervisor.  The hypervisor is responsible for providing the environment for the virtual machines to run in and coordinating resource usage among those virtual machines.

So where to start?

The hypervisor you choose depends on what hardware you have available to host it and what you want to do with it.  I had a spare computer that I was using as a NAS sitting around that I decided to convert into a virtualization box.  It was not very powerful, but you do not need a huge, loud rack mounted server with 72 cores and hundreds of gigabytes of RAM to play around.  You can set up something like this with less than 50GB of hard drive space and 6GB of RAM:
Of course, you are not going to do anything crazy with an environment like that, but it will allow you to play around a bit.

If you do not have a spare computer to use, then a Type 2 Hypervisor would be best.  I like VirtualBox because it is free, supports snapshots, and works well enough.  Snapshots allow to freeze a virtual machine at a specific moment in time that you can revert to later on.  So if you screw up, you can revert to that snapshot and you are good to go.  If there is interest in a post on setting up VirtualBox, I could put one together.  Let me know.

If you have a spare computer that you are willing to sacrifice to become a virtualization host or you are building or buying a new server specifically for the task, I would choose a Type 1 hypervisor.  Type 1 hypervisors have less overhead than Type 2 hypervisors because they have a minimal operating system under them.  Type 2 hypervisors run on top of a full installation of Windows, Linux, or OS X.  The choice of Type 1 hypervisor is a bit tougher than Type 2 hypervisor because both ESXi and HyperV server are good enough for a home lab.  There are other hypervisors like KVM (part of the Linux kernel) and Xen which straddle the line between Type 1 and 2 because they are generally on top of a Linux install.  They are viable options as well, and if you want to try KVM, Proxmox is a good choice.  It simplifies management of KVM virtual machines.

For the purposes of this post, we will talk about either ESXi or HyperV when it comes to Type 1 hypervisors.  Each has its pros and cons.  Here are some of them.

Pros
Cons
For a homelab with a single server, you cannot really go wrong with either.  If you decide to go with ESXi, there is one gotcha that I want to let you know about if you are going to install from a USB flash drive.  There are instructions on VMware's site on how to do it here.  However, these will not work if you are using a new Linux with syslinux newer than 4.03.  My system had 6.03 on it, and when I followed the instructions, it worked until I tried to boot from the drive.  I got errors about "Loading -c failed".  You can solve this by using an old version of Syslinux (like 3.86), available here.  If you are using Windows, Rufus works really well for this.

With HyperV Server, managing it can be tricky without a domain.  In order to manage it, hvremote is a great script to help configure the client and server.  Besides opening the appropriate ports on the firewall on both the client and server (hvremote helps with this), keep the following in mind: 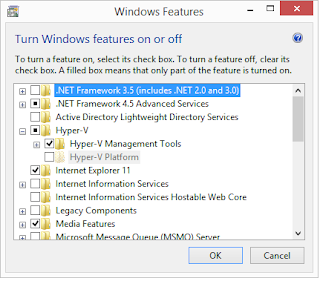 Once you have your environment set up, you can download evaluations of Windows products if you do not have spare licenses around.  They are good for 90 days and will be good enough to play around with:
Once you have an environment set up, you can start playing around which we will do soon.  If you need help, feel free to leave a comment.
Posted by Attack Zero at 1:58 PM